The Magic Wand is often touted as one of the top vibrators for sexual use, and rightly so. Now there’s a way to make it even better.

The Wand is the toy of choice for women who’ve never had an orgasm, or who find achieving one difficult and frustrating. It will deliver strong, steady vibrations for as long as your electric company delivers power. Don’t confuse it with those battery-operated, penis-shaped models of plastic or rubber — they can’t compete.

But newcomers often run into a problem that keeps them from truly appreciating the Wand: it can feel too powerful. While it does have two speeds, many people feel they should be labeled “too much!” and “WAY too much!”

A time-honored fix is to fold a pillow case or towel to an appropriate thickness and lay it over the area of interest to damp the vibrations. Advantage: This can be done using items found around your home. Disadvantage: You’re still stuck with two speeds. 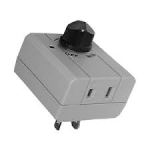 A better solution is to directly control the vibrator’s power. A product that does just that is the Philmore 30-10194 AC Dimmer Switch / Speed Control. It’s available at some electronics stores, and from Amazon on the web. It costs around $25, plus shipping. (Clients can purchase one from me at cost.) The Magic Wand has been extensively tested with this controller and the results are excellent.

The Magic Wand can provide enormous pleasure. Once you’ve experienced it with an infinite number of speeds, you’ll never go back to two.

I’ve received questions about other vibrator-control devices. I think most people will prefer the Philmore Dimmer Switch. Here’s my analysis; decide for yourself.

This is the nicest looking controller, and it comes in white, brown, or black to match your decor. There’s even a version with a night light (a small LED) so you can find the device in the dark, which could prove useful. You can get control over a fairly wide range of power, but you have to first jump to middle power, then back it down, which is odd.

Eric Albert, LMHC is a counselor in the Boston area who can help you deepen the emotional and physical intimacy of your relationship.
View all posts by Eric Albert →
This entry was posted in Sex tips. Bookmark the permalink.